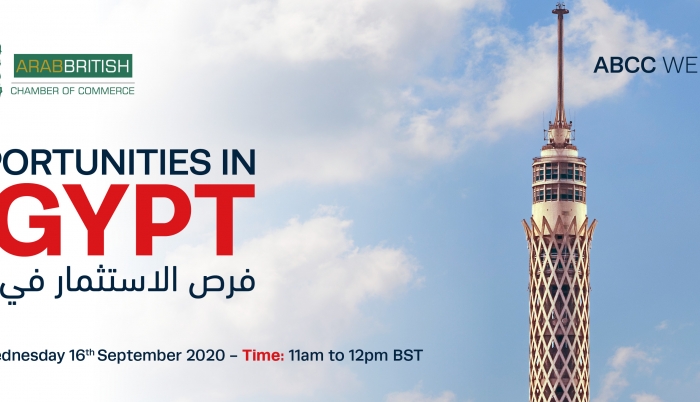 The Chamber hosted a successful webinar on Opportunities in Egypt on 16 September.

Opening the discussion, The Rt Hon Baroness Symons, ABCC Chairman, reflected on her own experiences of visits to Egypt and her interest in fostering strong bilateral cultural and educational links as well as in the areas of business. In this respect, Baroness Symons mentioned that she also chairs the British-Egyptian Society and sits on the board of the British University in Egypt.

His Excellency Mr Tarek Adel, Ambassador of the Arab Republic of Egypt to the United Kingdom, discussed the strong cooperation between the UK and Egypt and the advantages offered to investors by Egypt’s location as a transit point linking Europe to Africa, Asia and the Arab World.

The Rt Sir Jeffrey Donaldson MP, the UK Prime Minister’s Trade Envoy for Egypt, looked forward to the resumption of trade delegations to Egypt post-pandemic and remarked that talks on a future trade agreement between the UK and Egypt were making great progress.

H E Dr Alaa Ezz, Secretary General of the Union of African Chambers, delivered a detailed presentation on progress made by Egypt in recent years in upgrading its economy and improvements in business regulations, mentioning the major opportunities for investors and firms seeking to set up in the country. In particular, he highlighted the potential of its free trade zones and the Suez Canal free zone. Major infrastructure projects were underway to build new cities offering significant investment opportunities for the construction industry and suppliers, Dr Alaa Ezz said.

Mr Bandar Reda, ABCC CEO & Secretary General, warmly thanked the distinguished speakers for your participation in the webinar and said that they had succeeded in highlighting the enormous opportunities for doing business in the country. He fondly recalled personal family visits to Egypt over the years, remarking on the immense hospitality of the Egyptian people and the unique attractions of the country.

The ABCC was available to assist any company wishing to do business in Egypt, Mr Reda stated.